Jamel Ramiro is patient. It comes with the territory in surfing. It’s pretty helpful in life, too.

“Surfing for me is very therapeutic,” he said. “It allows me to be present and it makes me feel alive—wondering if this wave is going to crush me and kill me and keep me under, or if I'm just going to ride this amazing wave.”

If those sound like the words of a lifelong surfer, it might surprise you to learn that Jamel is relatively new to the sport. His first passion was actually Muay Thai.

Today, Jamel is a cold water surfer, a pitbull dad, and a personal trainer. But not that long ago, his life was pretty different.

Picture this: Jamel has trained in Muay Thai for years. He’s working a sales and marketing job in San Francisco, and teaching group fitness on the side. He’s searching for the next big wave of his career, which he knows is not behind a desk. A Muay Thai sparring buddy invites him to try out a new workout: TRX Suspension Training.

“I fell in love with it right away,” he said. From a strength and conditioning perspective, TRX was an ideal complement to Muay Thai. “I saw major improvements in a short amount of time.” 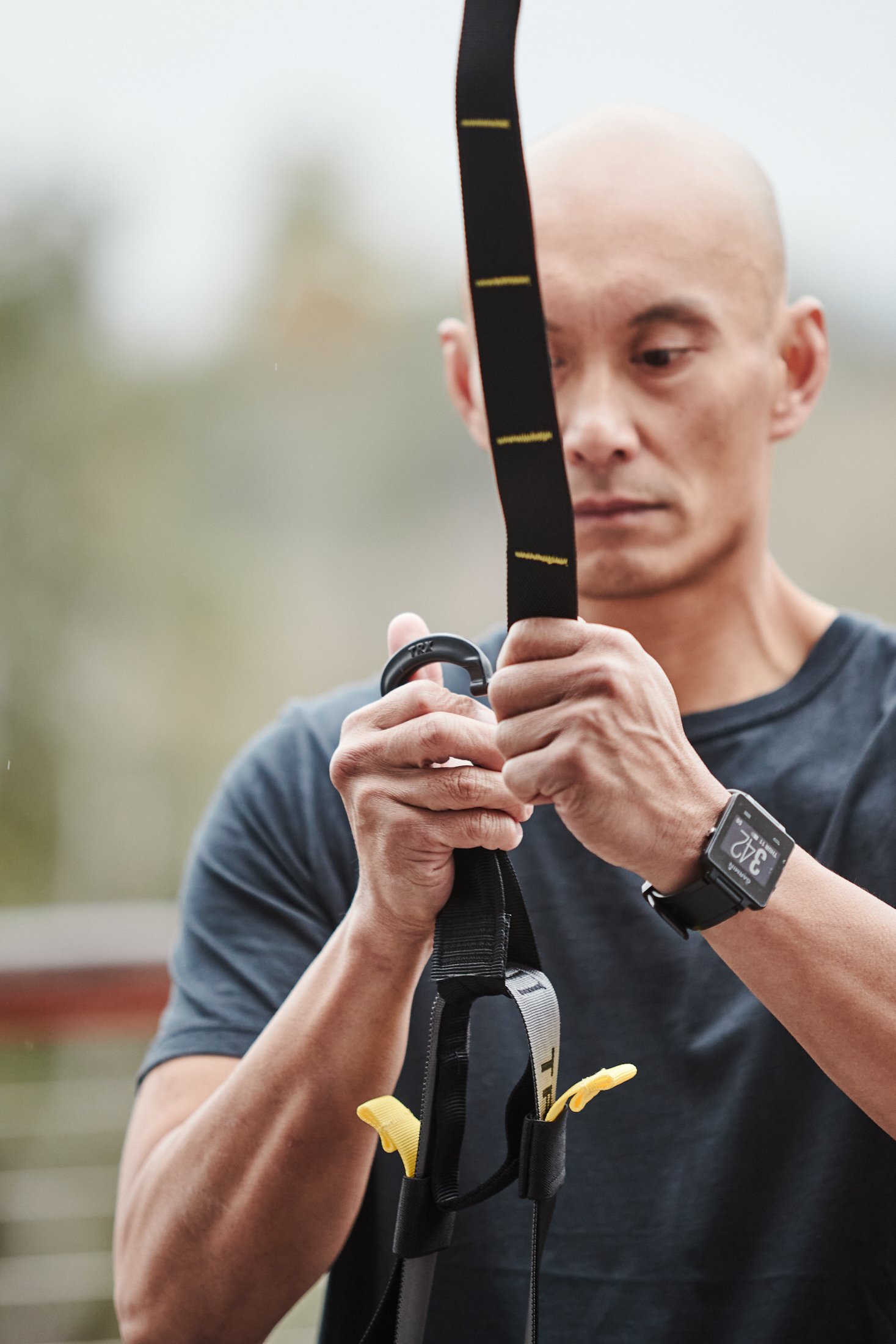 Wanting to perfect his form, Jamel kept going back. “One class became two classes in a row, became three classes in a row. And finally they were like, ‘Hey, do you want a job here as a trainer?’“

TRX may be an unlikely path to surfing, but it was the sliding door that led Jamel to the water. Taking a job as a TRX trainer motivated Jamel to pivot his career and leave his office job behind. When wellness became his livelihood, he had to cut back on Muay Thai training. “I ended up having to stop. I decreased my training because I was getting hurt too much,” he said.

That’s where surfing enters the picture.

Growing up in Chicago, Jamel always wanted to surf, but geography was not in his favor. In San Francisco, there was an opportunity. There was also an obstacle: the famously cold, choppy Pacific waves are not exactly welcoming for beginners.

“People would tell me that over here, it's really rough. Don't go out by yourself, especially Ocean Beach—it's known to be one of the hardest places to paddle out.” But, after a friend took him out to show him the ropes, he was hooked.

Surfing and TRX became a self-propelling cycle. While Jamel continued to hone his surfing skills, working as a TRX coach presented the opportunity to train world class surfers like Alex Martins and João De Macedo at the TRX Training Centre. De Macedo then invited Jamel to surf with him in Portugal. As Jamel began traveling the world—chasing waves, and training surfers— he would bring his TRX straps along for the journey.

“If I go to a surf camp, I'll usually leave behind my TRX and teach them how to use it. That way they can start training their people. When I believe in something I do my best to really push it,” he said.

Finding time to surf and cross train while working as a personal trainer isn’t easy. Bay Area surfers know the best waves come early in the morning; for Jamel, that’s often when clients want to complete their own workouts. But he makes the time to suit up later in the day and find his way to the ocean. When it comes to cross-training, he might try weight training underwater, or a session with his ever-present Suspension Trainer.

“I'm not the greatest surfer in the world,” he admitted, “but every day I'm striving to become better. I always have a goal every time I enter the water.”

For the uninitiated, the appeal of surfing is a mystery. Paddling out takes tremendous effort. You’re not guaranteed a wave. If one comes, it may only last ten seconds; thirty if you’re lucky. But for Jamel, the reward behind each wave is so much greater than just its duration.

“Surfing, in general, is not a progressive learning curve. It's more like the stock market, where you’re going to have good days and bad days. I pick up athletic things fairly easily, but with surfing—what I've come to learn and what's really humbled me—it's also the amount of time that you have on the board. Every wave is a different, new mountain that you’re just trying to conquer and understand.”