Have you ever considered what it takes to be a trailblazer? To be the first person to do… Well, anything? Muay Thai boxer and London-based trainer Nesrine Dally knows all too well the obstacles that come with being first: she was the first hijab-wearing athlete to compete in a Muay Thai stadium in Thailand. But her story is more than one of wake up, put on a hijab, kick butt. As a Muslim woman who covers, there were multiple points along the way when Nesrine had to decide how keep moving in her sport.

Nesrine discovered Muay Thai while studying sports science at university. “It's not compulsory, but if you're doing a sport science degree, you tend to pick a sport,” she said. She tried out for a few different teams—like netball and basketball—but nothing excited her. 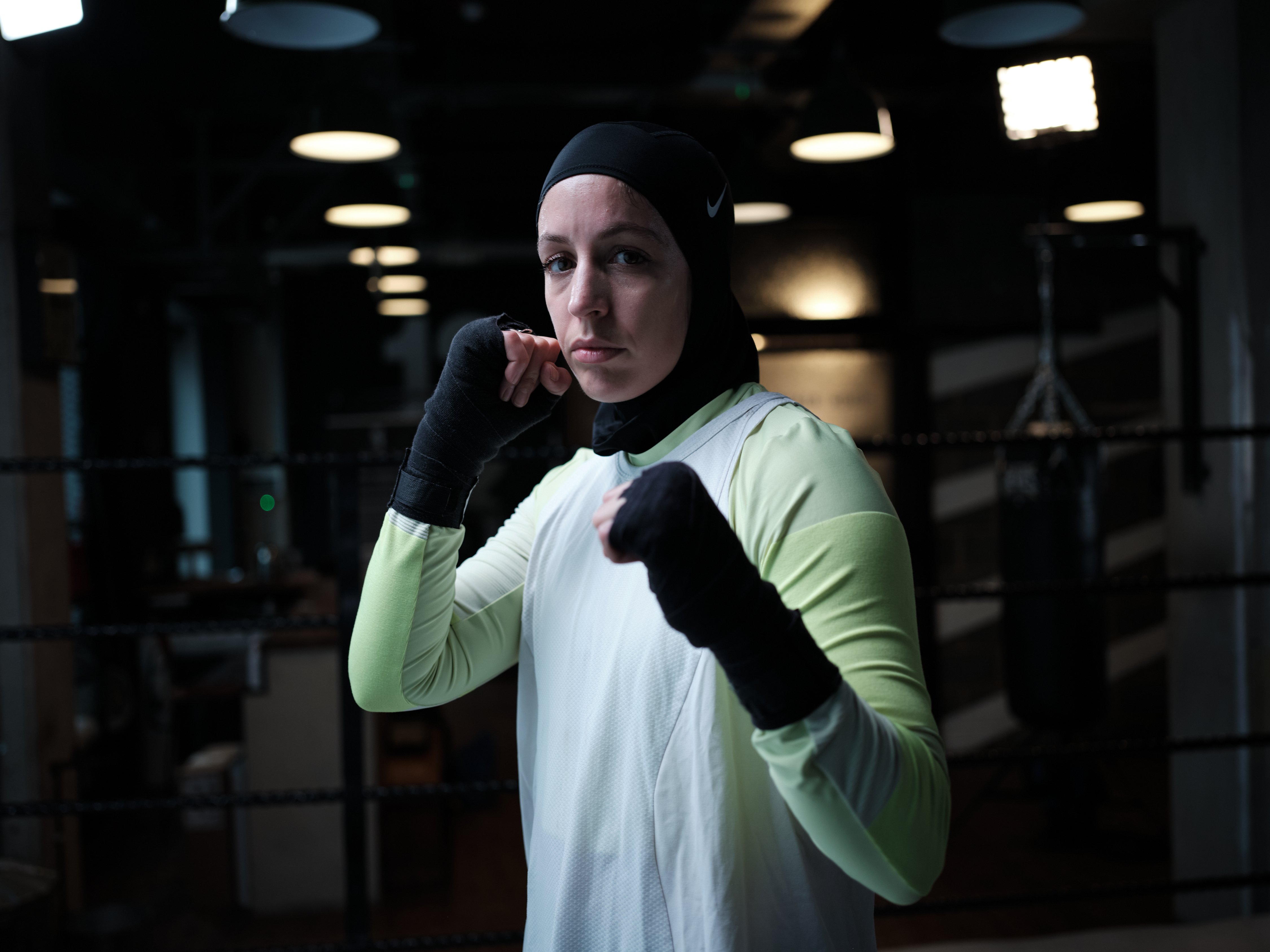 Then she found combat sports. She stumbled across a Muay Thai gym in Northwest London—two hours away from her university by bus—and she was blown by her first session.

“I'd never seen anything like it before,” Nesrine said. “It was such a difficult workout. I think that captivated me because I'm from quite an athletic background; I've done and competed in a variety of sports, and this was super challenging. And I liked the fact that everyone around me looked just beautiful when they were practicing.”

Nesrine didn’t cover when she started Muay Thai, so transitioning to competing as a hijab-wearing athlete meant adaptation.

“There were a number of challenges,” she said. “I think some of them were the internal anxiety and nerves around how I would be perceived from other people. And there were some actual, technical issues. There weren't any sports hijabs around at the time or they were very limited; if they were making them, they weren't the best products because it was very new.”

Without readily-available hijabs in performance materials, Nesrine set about improvising with what she could find in stores to make her own.

Beyond the lack of proper gear, she didn’t have many role models to look up to. “I think the biggest thing really was that there was nobody in the UK doing Muay Thai that looked like me, or was practicing wearing a hijab. It felt like I was sticking out like a sore thumb, as you say, so that was quite difficult.” There’s a thing that happens when someone forges a new path: it makes traveling down the same road easier for the next person. That’s what’s occurred in London after Nesrine blazed the trail as a hijab-wearing Muay Thai fighter. Other women could see themselves in her. They could imagine the possibilities.

Today, Nesrine runs her own health and fitness community space, Health Hub London. Though she’s had to get creative with virtual and outdoor training sessions throughout the pandemic, she says that she’s been able to make it work thanks to the versatility and portability of the TRX Suspension Trainer.

“During the pandemic, the TRX has saved my life as I've transitioned into training people outside,” she said. “Fourteen years in the industry— I never thought I'd be training people in a park, but that's where we are. It just meant I had a gym I could take around with me, and I didn't have to bring all the weights. My clients have loved actually doing TRX based sessions.”

In addition to running Health Hub London, Nesrine is Nike’s first hijab-wearing trainer. “Aligning with Nike and becoming a Nike trainer was a massive highlight in my career,” she said. “It allowed me to speak on a massive stage to a global audience… London is so diverse and I think it was so significant and poignant that they chose somebody like me to represent the fitness industry. Not everyone looks like the front of Women's Health—super skinny, white, blonde, female. The fitness industry is so vast and so diverse.”

That shift in the fitness industry mindset of what a trainer should look like is a subject close to Nesrine’s heart as she champions prioritising what strong feels like, over what strong looks like.

That’s a message that seems to be resonating with incoming clients at Health Hub. Nesrine said that the last five or six clients to join her training program have said their number one goal was to feel strong. “If I rewind five years ago, most people would have said to lose weight and tone up; which is fine if that’s what they want. Ultimately, there's been a shift in what people want. Now, people want to feel strong, they want to feel empowered. I think they understand that movement creates a feeling as well as the physical benefits of it.”

Over the last decade, there have been repeated cries that representation in media matters. Something as simple as showcasing a hijab-wearing athlete on social media demonstrates why. Scroll down Nesrine’s Instagram feed, and you’ll see her training other hijab-wearing women around London. Throughout Ramadan, Nesrine shares her tips for training and fasting during the month on social media. Her advice can resonate with Muslim and non-Muslim athletes alike, but she’s speaking to a segment of the population that rarely gets addressed; that rarely gets showcased in the fitness world.

As a hijab-wearing athlete in a combat sport, Nesrine hopes she can encourage the next generation of girls to take up martial arts and boxing, and smash the stigma that combat sports are for men.

Most of all, she wants people to understand the benefits of movement. “Movement creates positive change: physical change, mental change. It really allows you to explore your body's full potential and discover things that make you feel good... I want it to be accessible for women, especially Muslim women, especially young, Muslim girls who tend to drop out of sports at a young age because they don't see themselves represented in mainstream sports and the media. I hope to be almost a symbol of hope for the women that maybe once felt like there wasn't a space for them."